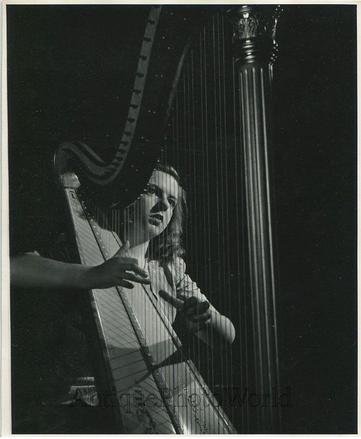 Tony Moreno was born March 13th 1956 in Manhattan, NY. His mother, Nina Dunkel Moreno, was a major influence on his interests in music. She was a harpist, musicologist and teacher who studied at Juilliard and the Fontainebleau Conservatory of Music with Marcel Grandjany, Nadia and Lilli Boulanger and Nicanor Zabaleta and Pierre Jamet.  She received the Premier Prix de Harpe/Prix Lili Boulanger in August 1954. She performed her first Carnegie Recital Hall at the age of 19. Besides performing solo harp pieces and chamber music, she was an accomplished pianist , musicologist and educator. She recorded various albums of folk music (Monitor) from The Netherlands, France, Spain and Japan. She also performed in various chamber ensembles. Upon returning to New York City in 1955, she was considered one of the finest harpist of her generation. She auditioned for many major orchestras, but at that time there was gender bias. Women were not considered for any positions. After a number of years touring, she decided to work in NYC. But this time the emphasis was on standards and popular music of the times. She worked very hard at developing a pedaling technique for the concert harp that allowed her to play changes. These were all solo gigs. The Hilton Hotel in midtown, recitals, chamber groups. Freelance. She later worked at Charles French Restaurant in Greenwich Village for a number of years, where she met many great composers (Alec Wilder, Vernon Duke and Burt Bacharach) and musicians (Stan Koor). Stan was Tony’s first drum teacher with whom he began a long apprenticeship at 10, continuing throughout high school. Practicing was not allowed in your apartment at a certain period in Manhattan, so Tony began commuting to various locations to practice. Tribeca, a deserted beauty parlor on Madison Ave. and finally at Gosta Peterson’s studio. Being a photographer and trombonist and jazz fan, he Tony practice in his studio. By 15 years of age he finally had his own space at Westbeth, where he worked for 42 years and eventually lost everything to hurricane Sandy.
"I lost a recently purchased Yamaha C6 concert grand, multiple drum sets, all of my instruments (including a set of Gretch drums owned by Philly Joe Jones), amplifiers, and most importantly my mother's music library that I had to move to my studio for space reasons. While performing and touring throughout Europe, she collected very old manuscripts dating back to the 15th. Century. Much of these compositions were written on parchment, and were probably the only copies in existence". In addition, all of Tony's cymbals and percussion instruments were inundated with 15 feet of water over a week. It was also a recording studio where over a dozen recordings were made; all the computer and electronic gear including microphones were destroyed.

Tony's grandfather, Eugene Borisovitch Dunkel, was born in Almaty, Kazakhstan in 1890. After studying at The Moscow School of Art, he returned home. The Russian Revolution forced him to flee to Istanbul, Turkey. There he served under the King as The Director of The Ceramics Collection. He later moved to Paris, where he became set designer for The Ballets Russes. His fellow artists included Salvador Dali (who gave my grandfather a gouache watercolor as a gift, which I had to sell) and Marc Chagall. He opened his first studio for set design for The New York Opera and Ballet on Hudson Street. The paint mixer was Jackson Pollock. He was also a portraitist and and painter. From Impressionist, to Abstract, as well as a portrait of my mother, aged 3, in the style of "The Old Masters". Particularly Vermeer.

Tony began playing and studying the piano at the Dalcroze School of Music at 4. At the age of 11, Tony’s mother took him to the neighborhood club to hear Elvin Jones, from whom he purchased his first set of drums and cymbals a week later. Tony studied with Elvin at Frank Ippolito’s Professional Percussion Center over the next 6 years (depending on Elvin’s schedule!).The trio was with Jimmy Garrison and Joe Farrel. Besides us, there were 2 other people in the club. “I went a few times a week to Frank’s; either for my lesson with Elvin, or just to hang. I made many close friends there: Papa Joe, Tony Williams, Buddy Rich, Mel Lewis, Gene Krupa, Billy Cobham. All the great drummers were there. It was heaven.” Tony also attended Jazz Interactions in NYC, where he studied with Al Heath, Art Blakey and Freddie Waits. Tony also studied with Bob Moses, who as a drummer and composer, encouraged the idea of writing and performing original music. After attending the Manhattan School of Music, Tony freelanced in NY and began working in Europe, where he resided for 6 years and began touring and recording extensively. Oslo, Stockholm, London, Paris, Copenhagen, Basel, Geneva, Zurich, Aux-En-Provence, Berlin, Koln, Milan, Parma, Rome, Madrid, Barcelona, Tangiers. And all points in between. Upon his return, he began teaching at The Door/A Center of Alternatives. The students were "at risk teenagers". Many of them living on the streets and subways. "After living abroad, it was time to return home and give something back to the community."

​Tony's father was born in Granada, Spain. In the photograph he is second from the left. After serving in the military,

In 1989, Tony returned to NYC with his wife, Susan Wedgle. His mother passed away a two weeks before the birth of his son Evan. Tony began gigging and teaching and recording soon after arriving back to town. Tony continued touring Europe once or twice a month while maintaining a full time professorship. He continues to teach over twenty years.